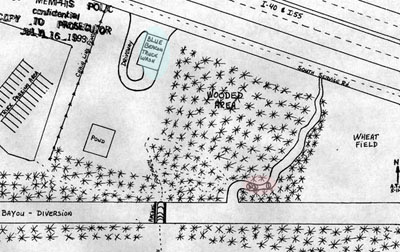 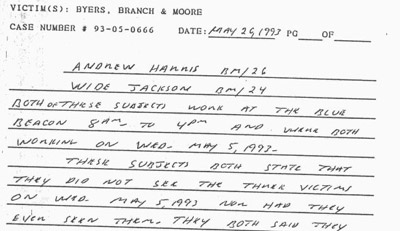 Whodunnit, Part Three: The Hole in the Center of the Case.

The closer one looks at the core of this case, the murkier the picture becomes. The most fundamental steps in a normal investigation weren't performed by the police or else they were performed and were not documented for the defense or prosecution.

The Discovery of the Victims.

The children were last seen at approximately 6 pm on Wednesday, May 5th, 1993. Their bodies were discovered the next day. The site where the children were discovered was presented as the site of the murders. The Blue Beacon was an all-night truck wash located approximately 75 yards from the discovery site. Its light blue building can be glimpsed in parts of the crime scene video as the children are being recovered. In spite of its proximity, there are almost no notes from the staff on duty that night. None of the five workers from the evening shift were interviewed individually. The brief notes available include the statement "were real business," although bay two closed at 6:30 pm leaving only one bay open. Bay one logged only nine trucks during the evening shift from 4 pm to 7:18 pm when the records end.

One of the early scenarios considered the possibility that a trucker killed the children. The logs of the trucks visiting the Blue Beacon are dated 5-5-93. The logs available in the police files only went to a last entry at 7:18 pm, leaving out the most critical time of the evening. The truck receipts corresponding to these logs are all dated 5-4-93. Furthermore, specific receipts are missing, even though they were photocopied together on the same page. 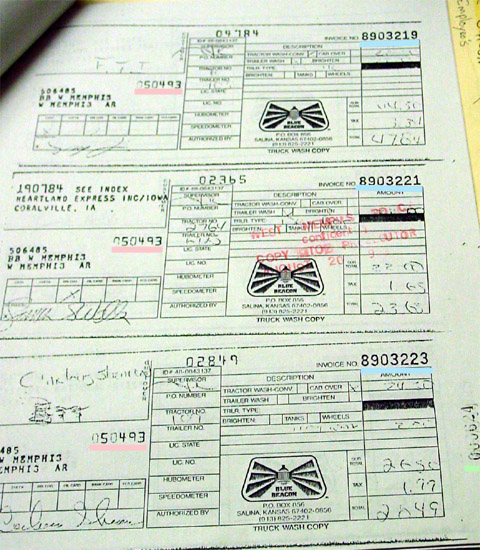 Receipts from the Blue Beacon. The receipts are dated 5-4-93 (pink underline)
Some numbers are missing (8903220, 22, blue underline) in spite of being
presented on the same page forwarded to the prosecutor (intake number, green).

Blue Beacon traffic summary (5/05/93, date above portion excerpted).
These entries correspond to the above receipt numbers. The log on this page ends
at 7:18 pm and the next page of the log is not among police documents.

Even odder than the missing information from the critical shift, two workers who finished their shifts at 4 pm on May 5th were interviewed as to what they saw - nothing. [Wide Jackson and Andrew Harris, statement pictured above]

Years later, a reporter tried contacting a Blue Beacon employee in regards to the case and was given the cryptic message that he was not allowed to talk about the case.

"We tore that old place down," says a Blue Beacon worker. He refuses to discuss the murders and won't give me his name. "It's over with and I'm not allowed to talk about it. All these years later, I'm still trying to figure out if those three kids that got killed were the same kids we told not to play here that day because of the trucks."
When I ask him if he believes they got the guys who did it, he hangs up. [Annette Stark, Los Angeles City Beat, August 2006, Issue 169]

Sometime after 8 p.m., a bloodied black man, ensconced himself in the women's restroom at the Bojangles about three-quarters mile from the Blue Beacon. The identity of this individual was never determined. Perhaps this incident was related:

Bill Heck - saw nothing but said we need to talk to Mrs. Clark. 735-xxxx. She works for Schneider Truck Lines evening shift. She said a driver saw a man with blood all over him Wed night. [Door to door interviews, Wilson Street]

From the above log, a Schneider truck visited the Blue Beacon at 7:04 pm. The receipt for this #890322 is among those that are missing. There are no notes suggesting the police followed up on this tip.

Of the various parents and step-parents, only Mark Byers and Christopher's biological father Ricky Lee Murray had extended interviews available in the West Memphis police archives. Brief interview notes are available for the Moores and a modest interview was made of Melissa Byers. The parents could have commented on potential suspects and suspicious individuals in the area. The prosecution alleged that the victims were stalked, even photographed before the crimes. They alleged that Echols regularly passed through the area. Several of the parents and step-parents were involved in the search and statements from them as to what they had seen that night could have been critical evidence. Recently, Terry Hobbs has stated that he had never been interviewed as to his actions that night.

Beyond this, a sad truth is that murder victims are often killed by someone they know. The family members and those known to the family were potential suspects. 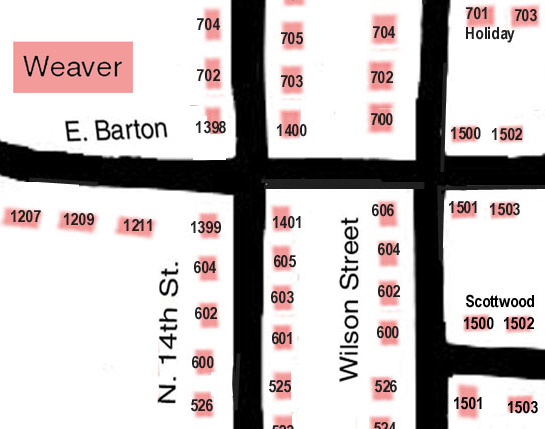 The Moores lived at 1398 E. Barton, the Byerses at 1400 E. Barton. Above diagram adapted from overhead map and city directory listing addresses.

Total for the 14 nearest neighbors to the Byerses and Moores: 7 not interviewed; 6 "nothing" or "no info;" 1 brief note. The neighbors of the Hobbs were not interviewed. In the door to door interviews of people much further away, sometimes full pages were filled out.

The police logs for 7 am to 3 pm shift appear altered. The documents available from the evidence room of the West Memphis Police Department appear to have a heavy "photocopy effect," as though copies of copies were made, obscuring what was on the originals. This lossy reproduction is not the case for the other logs. One entry at 9:22 a.m. was whited out. How can this be proven?

The upper portion of the police logs were filled out with the name of the officers, their numbers, and the date and then photocopied, presumably to save time when filling out the pages. The date on the logs that cover the time period in which the victims were discovered was incorrectly listed as 4/6/93 with the 6 drawn over. Because the names were filled in before copying, the lines that define the boxes with information should be equal (or vary equally with slightly different exposures). When one line is sketchy, it should be similarly sketchy in the next page. If a line that defines the box disappears, it means that this area was whited out after the upper portions were filled in but before the document was placed in the evidence. (The copies available on the internet are those I obtained when I went to the evidence room.)

Above, a small section of page four of the 7 am to 3 pm log of May 6th, 1993 as copied from the evidence room at the West Memphis Police Department, with calls starting at 9:19 am. The 7 to 3 logs were incorrectly dated 04-06-93 (and the 6 seems to be written over) but go on to describe the search and discovery of the victims as took place on May 6th. The upper portion, which I highlighted in brown is part of the section where the names and numbers of the individual officers were written in, prior to photocopying. This allows the person filling in the forms to not have to fill in the repeating information with each page. (Compare to the highlighted section below which has the exact same writing.) After the initial photocopying, the dispatch calls were filled in.

Below is the next page of the station logs. The area highlighted is identical to that above and the calls logged in begin at 10:23 am. The other pages continue in this manner through page 7 which includes the time of discovery. The images presented above and below demonstrate that the background of the pages should be equal, the entries different.

Below, the same documents as were shown above, this time a larger section. Officers Sanders and Reese (254 and 252, respectively, numbers highlighted in green) received a call at 9:22 a.m. The "Information On Call or Broadcast" entry for this call is blank. This isn't necessarily damning, there could have been a failure to fill this in. What appears damning is that the line below the information is missing. (As pointed out by the arrows highlighted by blue). This is consistent with what would have happened if the area was whited out. 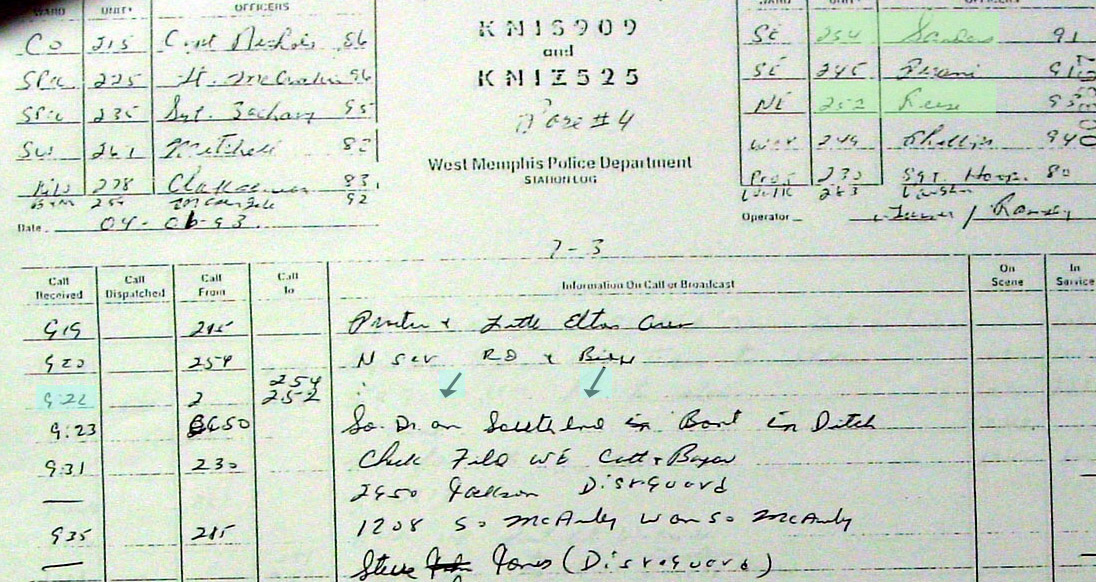 Since some lines are sketchy or nearly absent, that same line needs to be compared to those on other pages. The next page the line is mostly present (as pointed out by the  arrows highlighted in blue).

Page five of the 7 am to 3 pm station logs. The corresponding line is present in this page and the other pages.

Did the holes in collecting the most crucial information in this case come from laziness, incompetence or was it wilful?

Laziness was not a problem. The police generated thousands of pages of interviews and evidence in this case, travelling to other cities to run down rumors from young children.

If it was wilful, why?