"The victims were all eight years old, and eight is a witches' number."
Arkansas Supreme Court affirming the guilty verdict of Damien Echols and Jason Baldwin. 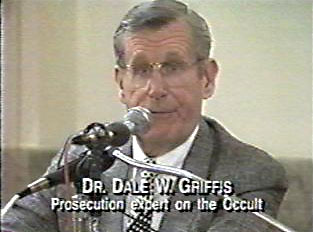 Dale Griffis, a prosecution expert with diploma mill degrees in the study of the occult, saw significance in the fact each victim was eight years old. "In Crowley’s work, he discusses that sex before 8 or you lose the magical power." [Griffis testimony, Echols/Baldwin trial] Griffis went on to correct this as "eight or before." And three victims?


Griffis:  One of the most powerful numbers in, in the practice of satanic belief is 666, and some believe the beast wrote a 6 as 3. [ibid]


Griffis drew conclusions from other evidence. He said significant injuries on the left side of one of the victims were a sign of a Satanic murder. "The people who practice occultism, they will use a mid-line theory, drawing straight down through the body. The right hand side, is usually related to those things which is synonymous with Christianity, and the left hand path is that which is practitioners of the satanic occult systems." [ibid] Although the majority of the injuries were on the right-hand side of the body, Griffis didn't suggest this meant a Christian killing.

Forty-eight hundred, fifty and two - other numbers played a role in describing Dale Griffis, the cult doctor. He said he began studying cults in 1976. In declaring his expertise, he claimed he had read 4,800 books about the occult, which would equal one a day. He declared "I know that I'm in about 50 books, and out of the fifty, two of them don’t like me."[ibid]

He described his master's thesis as a term paper. He admitted never having to visit a classroom to get his PhD. He said, he didn't need a classroom, "I was in classroom about every day when I was on the street," [ibid] referring to his work as a police officer in rural Ohio.

With Griffis about to deliver an opinion on whether the crime was occult in nature Paul Ford, Baldwin's attorney, questioned him.


Ford: Have you ever visited with Jason Baldwin?
Griffis: I don’t know who he is. [ibid]


In spite of doing his best to discredit himself - and real experts don't talk about how many books like them or how "the beast" writes numbers - Burnett qualified Griffis as an expert witness.


Ford: Your Honor, I think that he’s failed to demonstrate the reputable training, education and experience that qualifies as expert.
Judge Burnett:  I disagree. [ibid]


His testimony was well-received by the jury with a note made regarding 4800 books. 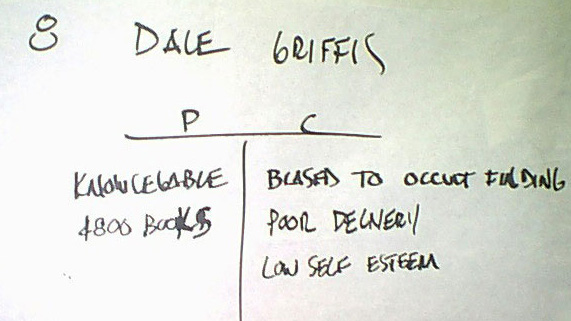 Jury's notes. The jurors ranked each of the witnesses.
Griffis was listed at number eight (A witch doctor's number).
P and C reflect their views of the pros and cons of the testimony of Dale Griffis.