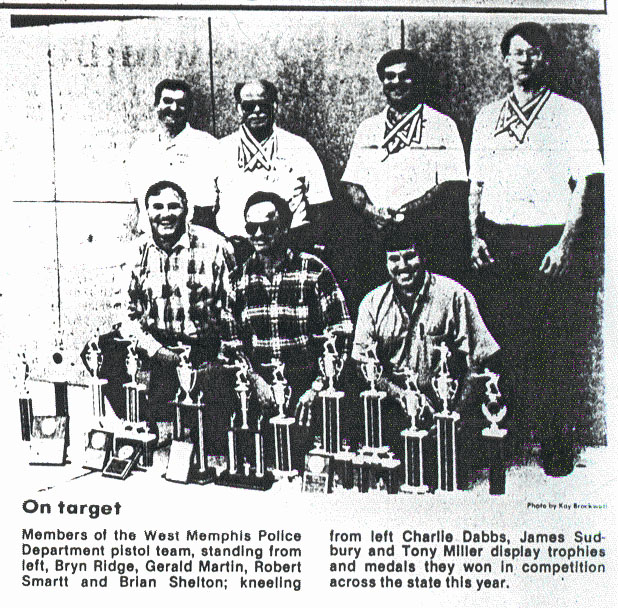 In early 1993, the West Memphis Police Department was riding a wave of acclaim. Their crack pistol squad had won numerous trophies in the state championships. The West Memphis-Crittenden County Drug Task Force (CC-DTF) was cited as the top task force in Arkansas and one of the best in the nation. Their achievements included, "During 1992, the drug task force seized more than $1 million in cash, 74 vehicles, $4925 in property, $81,075 in stolen property and 37 guns." [West Memphis Evening Times, February 10, 1993] By the late 90s this number would be over two million per year. [Arkansas Democrat Gazette, June 27, 1999] The money went into a fund to help pay the budget of the West Memphis Police Department, the CC-DTF and the salary of the forfeiture prosecutor.

Behind the accolades, something was very wrong. CC-DTF officer Clark White was found dead in his home on January 16. Two men, Mark Lewis and Albert Huggins were charged with his death. They claimed White regularly used cocaine. When they had come to collect White's automobile to cover money owed them, they slipped him a fatal dose of tranquilizer. 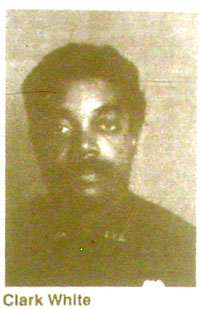 The seizures also carried with them a tainted story. The CC-DTF could legally confiscate money and property without even having to file charges against the owner. The claimants were then required to show that the money was from legitimate means to get it back. In November of 1992, Dan Peruchi, was returning to Texas with a car he had bought at auction for cash.  Just after crossing into Arkansas, he was pulled over by a CC-DTF officer. The officer came upon $18,890 he was carrying and said the money "looked like it had marijuana residue on it." [Arkansas Democrat Gazette, June 27, 1999] No charges were filed, nevertheless Peruchi lost the money. In another of many similar stories, in February 1993, Eliazar Cantu had $6,000 in cash he intended to use to pay for horse breeding seized by the CC-DTF. The officer claimed "he smelled like marijuana." [ibid] Neither got their money back.

In early 1993, the DTF members came under investigation by the Arkansas State Police. Considering the millions in dollars and goods seized, the amounts in question seemed petty: two hundred dollars and a small amount of drugs were missing; some firearms were claimed to have been kept for personal use. 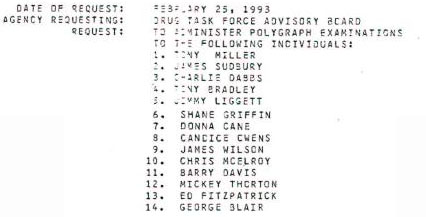 All of the officers passed the polygraph including the question regarding appropriating confiscated guns. When interviewed they turned on each other.

The investigative interviews finished in late April of 1993. The next few weeks would be busy for the CC-DTF. On April 27, an undercover operation resulted in 17 arrests [West Memphis Evening Times, April 28, 1993]. Although 16 were charged with offenses that could receive life sentences, all 17 were set free without having to secure bail due to overcrowding in the jail. "We just summoned them and told them to appear in court," Chief Deputy Bob Cooper said. "We didn't have any room for them." [ibid, although 7 of the 17 eventually were held in custody after an April 30 hearing]. On the day the three victims were recovered, the CC-DTF netted $135,000 in cash and property from a drug raid, in what was described as their most successful sting operation to date. [West Memphis Evening Times, May 10, 1993]

The CC-DTF and the Child Murders

Even though the West Memphis Police Department is fairly large (82 officers in 1999), the crime scene behind the Blue Beacon looked like a meeting of the Drug Task Force. After accounting for the officers that first responded to the call and recovered the victims, the other officers at the crime scene were

Although not at the crime scene, DTF member James Sudbury would go on to play a key role in the investigation into the murders. The investigation itself was run out of the Drug Task Force headquarters at 106 Dover, West Memphis.

In July of 1992, Mark Byers, stepfather of victim Chris Byers, was arrested in Memphis for cocaine and weapon charges but did not serve time. He became an informant. In his police interview, he expressed concerned that the murders may have been related to his drug informant activities. Sudbury and Ridge performed the interview.

Mark:  Well, I helped 'em on a meth lab out in Marion, but I never got directly involved in...
Sudbury:  Is there anyone from Memphis that, perhaps you talked to OCU about?
Mark: Yes, there sure is. But, I think he's in jail right now. His name..do you want his name?
Sudbury: Doesn't matter.
Mark: Yeah, his name was Scotty Reddin.
Ridge: Okay.
Mark: I worked with...
Sudbury: Scotty's from West Memphis, is he not?
Mark: I think so, and his girlfriend or something, lives down there off McCauley, I think. Or no, his wife's sister lives on McCauley. Drives a little maroon Chevrolet pick-up truck. And they were just bound and determined, Scotty's sister, Scotty's sister-in-law, let me get it right. Every time she'd see me or Melissa, she'd flip us off, cuss us - you son of a bitches, we're going to get you. We know you busted Scotty. [Mark Byers police interview, May 19, 1993]

The OCU referenced above is the Organized Crime Unit of the Memphis police indicating Byers was also an informant for them. There is no evidence that the West Memphis Police took seriously Byers role as an informant as a possible motive for the crime. No interviews were performed with Scotty Reddin or a Lee Griffin whom he also cited as possibly considering revenge.

Note with the files of David Wren.

Nineteen year old David Shane Wren and his twin brother Michael were precocious criminals. By age 17 David had racked up three burglary and theft charges, an arson arrest and, with his twin brother Michael, jail break. Along with their half brothers, Frankie Knight and James Thornton, they lived in the Mayfair Apartments, a large complex that ran from East Barton to the bayou.

Nicholas Smith, aged 16, placed Frankie Knight at the north end of McAuley (near the pipe) the evening of the fifth, along with several others he could not identify. He said they were acting suspiciously, as if it were a drug sale. According to Smith, they were centered around an orange Bronco. Little Al Thomas, an associate of the Wrens, had an orange pick up, but said he hadn't used it recently. He denied being in the area.

Frankie Knight was brought in for questioning. He knew two of the victims through his half brother, James, a friend of Ryan Clark. He took a polygraph passing the questions as to whether he was involved in the crimes. He flunked the question of whether he knew who did it. In his police interview, when asked if he knew who killed the children, he mentioned as possibilities a black male who lived in the Mayfair Apartments, a white male in his twenties with a long beard who rode a bike, possibly someone from the 76 truck stop, and Damien Echols. He also said he didn't know who the police should look for.

Although David Wren had already been sentenced to a total of 56 years for various charges, he was free on probation at the time of the killings. This may have been due to his status as an informant. Brought in for questioning, he accounted for his whereabouts for the day, saying he had stayed with Beverly Houston and her family on Johnson Ave. Ridge confirmed this with Houston. The Wrens had a history with the Houstons. When the Wren brothers escaped from prison, they went to her house.

The Outcome of the CC-DTF Investigation.

In spite of admitting that they had kept guns and other items, in spite of the officers pointing fingers at each other for planting drugs, the 1993 investigation resulted in a wash. "No disciplinary action will be taken against the Crittenden County deputy sheriff nor the Marion police officer assigned to the West Memphis-Crittenden County Drug Task Force named in the Arkansas State Police fund." [West Memphis Evening Times, November 15, 1993] The Police Commission came under fire for their decision. "People come up here with tears in their eyes. They have nobody to go to (with complaints about the drug unit.)." [Justice L.D. Callan quoted in West Memphis Evening Times, the parentheses appear the original, November 17, 1993] 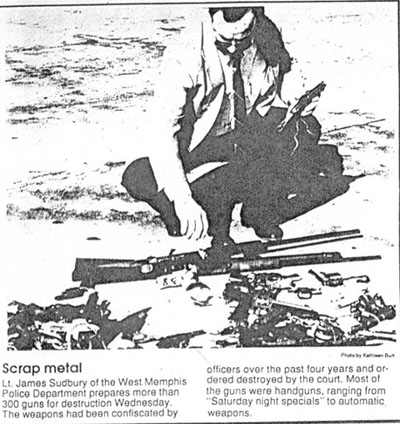 Like the confiscated weapons, the drug task force was scrapped,
melted down and reconstituted.  Photo, West Memphis Evening Times, February 17, 1994.

The commission voted to reorganize the CC-DTF. The West Memphis Police unit would separate from the Crittenden County unit. New scandals and charges of criminal activities would result in further reincarnations.

In May 2009, West Memphis Chief of Police Robert Paudert announced that they would be reforming the Drug Intervention Task Force. "Chief Paudert says, "We are going to seize drugs and money and look forward to it. I'm gonna take personal attention in this unit I'm gonna hand pick the officers going in it were going to ensure no money is ever taken off the interstate that's not turned in like it was before."" [Myfoxmemphis.com, May 26, 2009]