With just under 30,000 in population, the city of West Memphis has a modest number of major crimes. In recent times, homicides have totaled less than ten per year while assaults averaged about three per week. This makes May 5th and 6th of 1993 all the more unusual. From the evening of the fifth through the evening of the sixth:

An Annotated Chronology of Notable Incidents Presented in the Police Logs

Spotlight: Gunplay. The gunfire mentioned in the overnight police logs in the areas of Autumn Street, Jackson, and 20th were across town and far from the missing children. However, in the door to door interviews, residents in units #3, #5, #89 along with the manager of the Mayfair Apartments all noted gunshots that night. (The Mayfair Apartments were just south of where the children were found.) Other neighbors who reported gunfire included the Blue Beacon manager and the residents of 1204 Proctor. Ryan Clark, Ritchie Masters and Robbie Young, who together searched the Robin Hood Woods early in the evening, described hearing gunfire. Mark Byers was questioned regarding what he heard:
Ridge- Well let me ask you a question. While ya'll were out searching during this period of time after it had gotten dark, we had several reports of gunshots being fired. Was somebody down there with a gun maybe shooting up in the air hollering at the kids? Mark- I never heard a gunshot fired. Ridge- we got some reports of that. It may have been back behind the expressway. Mark- I never heard a gunshot. Uh, there by the house, when we were standing around the house, my wife said something about, did you hear that gunshot? This was like, 12 or 1 o'clock. I said, nuh uh. And that was just a car right down there on Wilson that backfired. [John Mark Byers police interview, May 19, 1993] 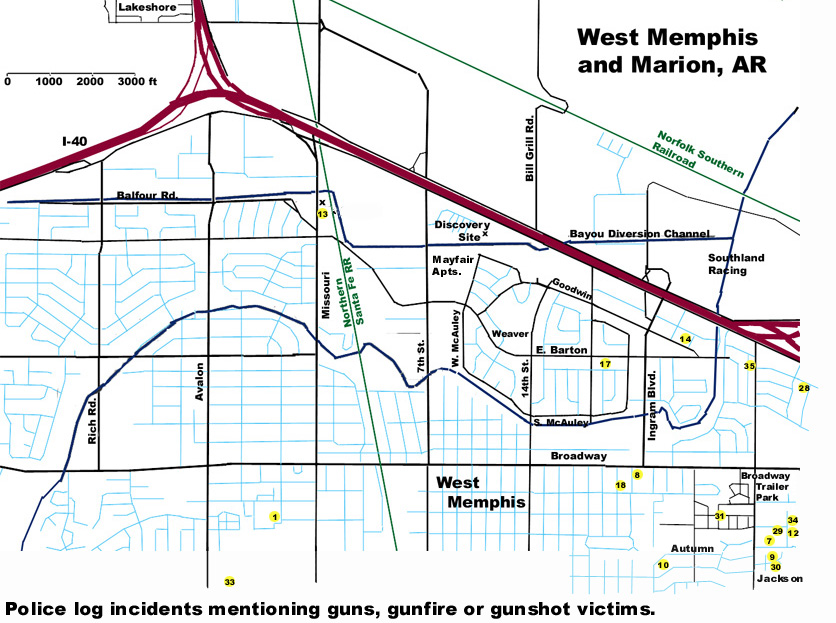 The yellow circles designate incidents involving guns, gunfire or gunshot victims mentioned in the police logs for 3 to 11 pm, May 5th through 3 to 11 pm, May 6th. The numbers refer to those appended to the items in the chronology presented here.  Not included are witness statements or door to door reports of gunfire.
May Sixth
Spotlight: Charles Morton. While hitchhiking his way across country and passing through West Memphis, Charles Morton witnessed a man hit by a vehicle along the South Service Road. When he gave his statement to the police, they ran a background check and discovered he had an outstanding out-of-state warrant. Morton was taken into custody. Later, while in jail, he was questioned about the children murdered and passed a polygraph. According to Morton, "I was walking along the highway when a black guy came running out from behine a pawn shop thier on the service road that ran along side the highway right in front of this gray colored car. The car jerk to the right to keep from hitting the guy. The car stoped and the driver spoke with the guy I had already walked past them when the driver of the car ran up to me and ask if I had seen what went down I said yes he asked me if I would be willing to make a statement to the cops because the guy (black) said he was going to sue the guy for hitting his foot but he ran over to the 24 hour Waffle house." [Charles Morton, personal communication] Morton went on to say the black man was "running like a bat out of hell..." [ibid]
Spotlight: Drug busts. On the day the three victims were recovered, the Crittenden County Drug Task Force netted $135,000 in cash and property from a drug raid, in what was described as their most successful sting operation to date. "An undercover drug operation last week culminated in the largest cocaine sting operation in Crittenden County history and left three men in three different counties in jail.  Arkansas State Police investigator Ed Fitzpatrick said the sting arrests began Thursday [May 6th, 1993] in Brinkley, where two men attempted to purchase five kilos of cocaine. Tom Sutton of Brinkley was arrested after attempting to purchase the drugs from an undercover investigator.  Information from that operation led to search warrants being issued in the Blytheville area. James Earl Moore of Blytheville was arrested during the execution of one of those warrants. From Blytheville, the operation moved to Marion on Friday morning, where 30-year-old Reginald Stewart of Memphis was arrested when he attempted to sell three kilos of cocaine to an undercover agent in a Marion motel room. [West Memphis Evening Times, May 10, 1993]
Spotlight: More gunshot victims. Between 9:30 and 10:38 pm of the sixth of May, six calls were made to the police about gunfire, each spaced by at least nine minutes, suggesting separating incidents. At 9:46, a gunshot victim was picked up by the fire department rescue. With multiple incidents of gunfire, this may or may not have been the same victim described in the May 10th, 1993 edition of the West Memphis Evening Times. "Kenny Lewis, a 17-year old black male, was shot in the head with an unknown caliber bullet as he and two companions were walking along the 3000 block of Autumn at 10:49 p.m. Thursday [May 6th]. [snip] He died of the wound 8 a.m. Sunday [May 9th]. [snip] Also injured Karisky Davis, 18, of 600 N. 14th St. He was shot in the left shoulder." The latter address is three houses down from where the Byers' and Moores lived.
The Leflores     Marvin Leflore is mentioned in the 9:39 and 10:17 pm May 6th calls. He had been convicted in 1991 of possession of a controlled substance. In 1996 he was sentenced to twenty years for cocaine charges, his sentence suspended and then his probation later revoked. His father, Marvin Leflore, Sr. is listed on a genealogy website as having died May 6th, 1993. Other family members include Andrew Leflore, currently in Arkansas prison for first degree murder.     The Leflores were mentioned during a couple of interviews regarding the murders of the children. From the interview with Jeffrey Looney.

Q. Do you ever walk home? A.  No.  If I get off early I get a ride with Gergia (sic) LeFlore.  [snip] Q.  Asked if he knew anyone crazy enough to do something like this. A.  Steven Skaggs. [Jeffrey Looney police interview, May 27, 1993]
Steven Skaggs also referred to the Leflores:
He stated that he was having a conflict with the Leflores and that they had threatened to kill him over the disappearance of some guns. [Summary of Skaggs interview, Bryn Ridge, May 15, 1993] 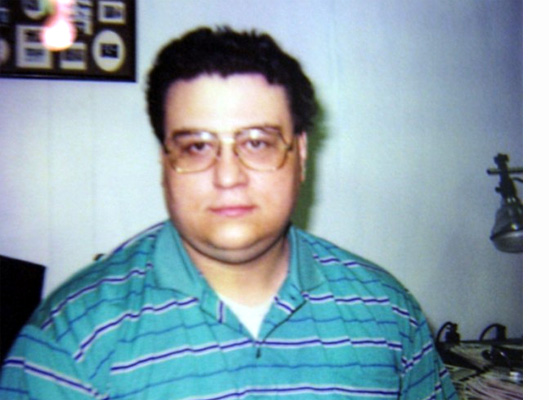 Note on Hatchett's file.     Hatchett went on to open "Southland Police Supply," a store specializing in public safety and police equipment.     In spite of his criminal record, Daniel Hatchett has been a regular candidate for the office of Crittenden County Sheriff. From the Commercial Appeal describing his 2000 candidacy:
Pawnshop owner Daniel Hatchett, 41, is taking on six-term incumbent Dick Busby, 63, in a race pitting different kinds of experience. Hatchett, who also owns a police equipment business, was nearly killed in an unsolved pawnshop robbery in January 1996 and says the experience "soured" him on local law enforcement. A former Tipton County, Tenn., and Crittenden County sheriff's deputy, he says he's running as a victims advocate. [Commercial Appeal, 2000, exact date not noted]


He lost the 2000 election and his subsequent efforts have been unsuccessful. After his 2002 loss he joined with other losing candidates in an unsuccessful court case claiming voter fraud.     As part of Hatchett's 2008 run for Crittenden County Sheriff he put out a press release stating "...Hatchett has 15 years in law enforcement experience and has been a local business owner in West Memphis for 18 years. He's a former deputy sheriff, a Mason, a member of the Shrine Club, the Jaycees, the Chamber of Commer, the Tennessee Sheriff's Association and the Arkansas Sheriff's Association." [West Memphis Evening Times, March 20, 2008] He lost the election yet again, this time garnering 4581 votes to Busby's 12,479. 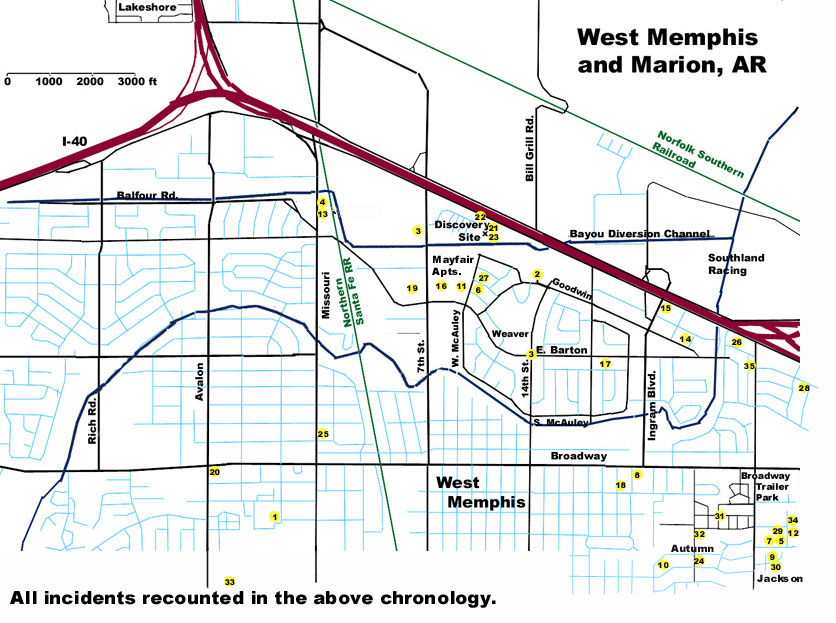 The incidents as recounted in above chronology. Not included are incidents for which a location was not given.  The log entries chosen for this chronology were those involving violence and guns (including gunfire and gunfights), key events in the search and discovery of Byers, Moore and Branch, and incidents taking place in the neighborhood where the victims lived or were discovered.